Invitation to Valentine Dance Leads to Nearly 60 Years of Marriage 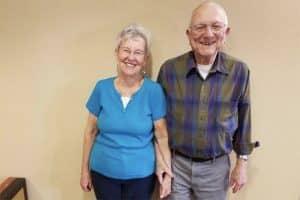 Nearly 60 years ago, Gary Allison’s friends challenged him to ask the next girl who walked into their psychology class to a Valentine’s Day dance.

“I just walked in the door at the right time,” his wife Sydney Allison, 78, said.

The two, who dated for about a year after their first date, will celebrate their 57th wedding anniversary in June.

The Allisons, both from California, graduated Whittier College together and began their lives — she as a fifth grade teacher and he was drafted to serve in the U.S. Army.

They moved to Broomfield in April to be closer to family who live in the area.

Their Valentine’s Day will be spent like many other Tuesdays — an early dinner and then Sydney teaching an English second language class.

“Maybe that’s why it’s survived,” Syndey said. “We haven’t been too flowery.”

That, she said, and marrying at a younger age has allowed them to grow and build habits together. Over the years they enjoyed camping and traveling. Now, Sydney still stays active by teaching classes and has joined the Women’s Gathering, a group that meets once a week to knit and crochet hats, scarves and blankets for local organizations.

Sydney raised three children before returning to teaching. The couple lives at The Avenues Crofton Park in Broomfield and they have five grandchildren.

“Don’t think you’re going to marry someone and change them,” Sydney said.